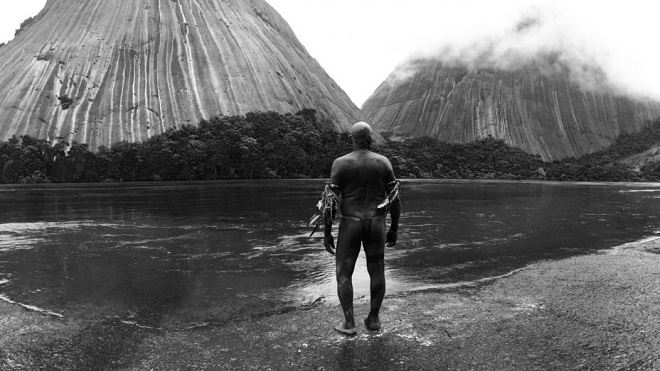 Embrace of the Serpent is an ethnographic film that has two parallel narratives set in different dates – 1909 and 1940’s – set during the Amazon rubber boom. As the movie charts the journey of two explorers, it shows the environmental and systemic impact of colonialism on the Colombian Amazon.

In one encounter, a fanatical clergyman insists on curing his young male charges of “cannibalism and ignorance”, which includes whipping and mental purging of their ancestral norms. Later on, his compound turns into fiefdom ruled by a religious quack and as Karamakate puts it, becomes “the worst of both worlds”.

At the same time, the plot also shows the conflicts caused by colonialism. Karamakate looks down on Manduca, a westernized local who serves Theo and believes that the outsider can teach other white people about their culture.

The shaman is not convinced and rightfully so – at some point, the ethnographer gets angry for losing his compass to a local chief believing that the technology will erase a piece of their culture as if their lack of knowledge is a sign of purity. This isn’t to say that the Karamakate is always right. The movie also takes a look at his flaws as much it subtly lectures on his companions.

The characters are well-cast. Had this been made in Hollywood, it would have been from the perspective of the explorer, the most recent of which is the dull Lost City of Z.

Thankfully, it’s backed by genuine intentions. Cinematography, detailed production design, and atmospheric sound design transport you into a lost world. Even if it’s black and white, you can still get a sense that you’re in a lush untamed landscape that’s being plundered. For every widescreen composition of a river or the jungle, there are signs of a civilization headed towards oblivion.

Embrace of the Serpent is primarily focused on creating an experience, which means you’ll have plenty of long tracking shots to evoke a mood. As a result, it gets weighed down by its own longueurs, especially with an overlong second half.

Nonetheless, once you submit to the Embrace of the Serpent, it’s a hypnotic cinematic experience that’s visually and thematically rich. Beyond its heartfelt intention of giving lost people a voice and its nuanced look at colonialism, the movie also recognizes that science and spirituality are intertwined.

As the movie reaches its trippy abstract conclusion, Embrace of the Serpent tells us to stop controlling things with our preconceived notions and instead, open ourselves to what we still have yet to see and learn.

Embrace of the Serpent

Karamakate, an Amazonian shaman and the last survivor of his people, and the two scientists who, over the course of 40 years, build a friendship. The film was inspired by the real-life journals of two explorers (Theodor Koch-Grünberg and Richard Evans Schultes) who traveled through the Colombian Amazon during the last century in search of the sacred and difficult-to-find psychedelic Yakruna plant. [Oscilloscope Pictures]
9

Embrace of the Serpent is a stunning tribute to lost civilizations and an indictment of colonialism thanks to its gorgeous imagery, heartfelt narrative and atmospheric sound design.